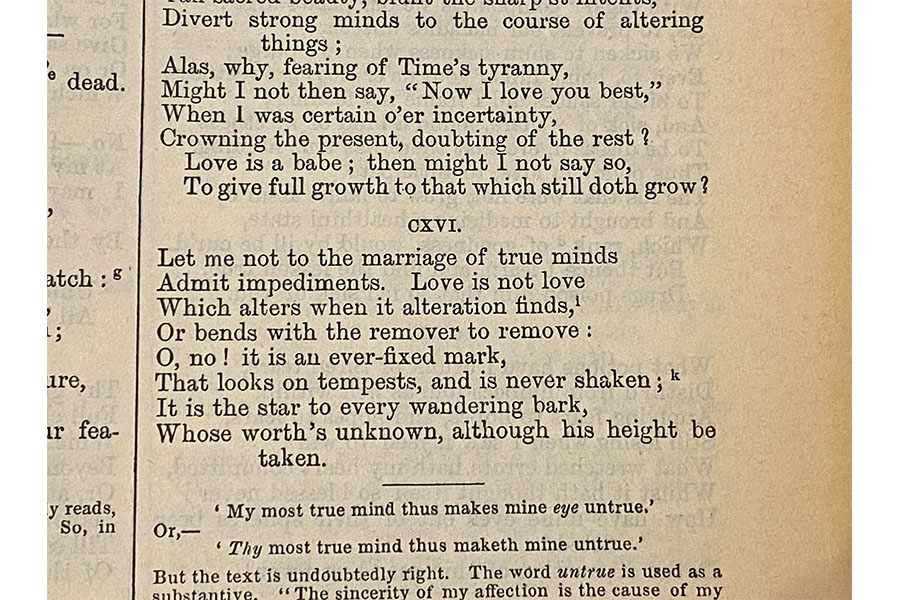 Caitlin McCormack ’21 recalls Sonnet 116 fondly as her first experience with performing in theatre.

Caitlin McCormack ’21: Sonnet 116, “Let me not to the marriage of true minds”

“Sonnet 116 is my favorite sonnet because this was the first piece of theatre-related material that I’d ever memorized or performed, and I can still recite a decent amount of it to this day,” Caitlin said.  “I had to do it for a reading and writing workshop assignment in seventh grade and spent nearly a month trying to perfect it.  It’s one of Shakespeare’s most famous sonnets, and it’s no wonder why.  It’s an absolutely beautiful sonnet that seeks to define love by stating what it is and it not, but ultimately neglects to succinctly define it.  It’s likely many other writers would’ve attempted to come up with their own poetic definition to best complete it, but not Shakespeare.  I think it truly stands to demonstrate just how different and brilliant Shakespeare was.”

“What I love about Shakespeare’s writing is that each of his works, whether a play or sonnet, is so intrinsically different from the last.  I’ve always been astounded by how much he was able to produce, each startlingly unique, in such a short amount of time.  Besides the brilliance of it all, I’d have to say that I most love is how open-ended and multifaceted all of his characters are.  You will never see two productions of Shakespeare’s plays that are alike because of how much there is to do with his works, whether it’s due to the actors’ interpretations of his characters or the larger concept of the show.  Theatre companies are able to make Shakespeare’s works their own because of how he’s written them, which is something wholly unique to Shakespeare.  I mean, the fall play Much Ado About Nothing was able to be set during the pandemic without any interference with the plot.  It’s truly remarkable.”

Sonnet 116: “Let me not to the marriage of true minds”

Let me not to the marriage of true minds

Admit impediments. Love is not love

Which alters when it alteration finds,

Or bends with the remover to remove.

O no! it is an ever-fixed mark

That looks on tempests and is never shaken;

It is the star to every wand’ring bark,

Whose worth’s unknown, although his height be taken.

Love’s not Time’s fool, though rosy lips and cheeks

Within his bending sickle’s compass come;

Love alters not with his brief hours and weeks,

But bears it out even to the edge of doom.

If this be error and upon me prov’d,

I never writ, nor no man ever lov’d.