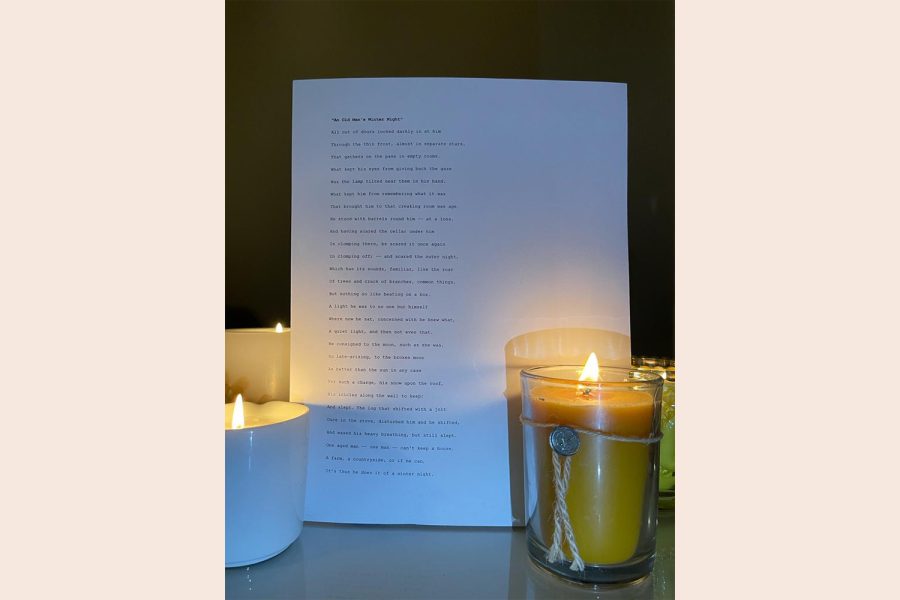 Samantha Mecane ’24 appreciates the sense of calmness in “An Old Man’s Winter Night” by Robert Frost.

“I have chosen this poem because of the vivid imagery and detailed descriptions of what is happening,” Samantha said.  “I also love the sense of peace and stillness that the poem portrays.”

All out of doors looked darkly in at him

Through the thin frost, almost in separate stars,

That gathers on the pane in empty rooms.

What kept his eyes from giving back the gaze

Was the lamp tilted near them in his hand.

What kept him from remembering what it was

That brought him to that creaking room was age.

He stood with barrels round him — at a loss.

And having scared the cellar under him

In clomping there, he scared it once again

In clomping off; — and scared the outer night,

Of trees and crack of branches, common things,

A light he was to no one but himself

Where now he sat, concerned with he knew what,

A quiet light, and then not even that.

He consigned to the moon, such as she was,

So late-arising, to the broken moon

As better than the sun in any case

For such a charge, his snow upon the roof,

His icicles along the wall to keep;

And slept. The log that shifted with a jolt

Once in the stove, disturbed him and he shifted,

And eased his heavy breathing, but still slept.

A farm, a countryside, or if he can,

It’s thus he does it of a winter night.