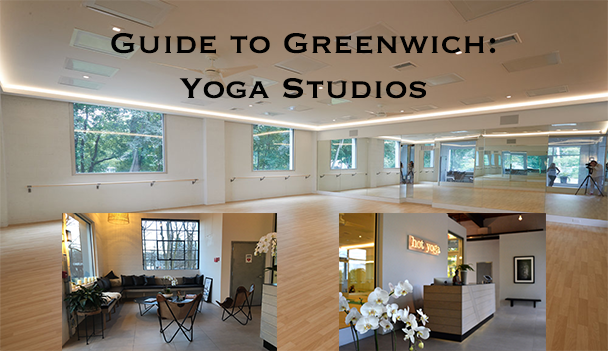 For this edition of Guide to Greenwich, we traveled through Greenwich to review yoga studios and try the different classes that they offer.
Kaia Yoga

Our first class was at Kaia Yoga, located at The Mill in Glenville. Kaia Yoga has several other yoga studios in Fairfield County in towns such as Darien and Old Greenwich. Kaia Yoga offers hot, warm, Vinyasa, and Yin yoga, as well as meditation classes. A receptionist welcomed us and gave us yoga mats before bringing us into one of their two studios. Both experienced yoga costumers and beginners filled the studio. We chose to take the Vinyasa open level class, which cost $25 per person.

The instructor was welcoming and kept us engaged throughout the class. She used the Sanskrit words for each position which was an interesting addition. The class was challenging for us. Although we did not feel completely relaxed at times, it was a good workout but left us sore afterward. This studio is clearly a favorite in Greenwich, offering multiple classes every day which are oftentimes full.
The Studio Greenwich

Next, we traveled to The Studio Greenwich, located on West Putnam Avenue, which recently opened January 17. When we entered the spacious, airy studio the owner and one of the yoga teachers greeted us. The decor of the studio was very trendy. It has one studio fitted with infrared lights which instructors use for hot yoga. The studio has a comfortable seating area at the front and a sauna in the back. We chose to take the restorative yoga class with essential oils, which we attended for free because of a promotion they had running for a free introductory class.

Our instructor was very passionate about yoga and helped us through each position and exercise. Since the studio had just opened, we were the only two people in the class, however, we enjoyed getting to know our instructor and the practice of yoga. The temperature in the studio was a warm 85 degrees Fahrenheit. Calming music played throughout the session which made us feel relaxed. We felt confident because our instructor explained each position to us very thoroughly. At the end of the class, our instructor put essential oils on our palms to help us relax even more.
Yoga by Danit

The final class we took was at Yoga by Danit, located in Sherwood Place. Yoga by Danit has one studio where it holds yoga classes. The studio itself was clearly a popular spot for yoga-lovers in Greenwich, as there were close to 20 people who attended this Sunday morning class. Yoga by Danit offers Vinyasa and Yin yoga, as well as meditation. The owner of the studio, Mrs. Danit Schreiber, introduced herself to us before the class started. We chose to take the all-level Vinyasa class, which cost $24 per person.

Although it was a small room, the studio had a lot of natural light and was quite warm. The class mainly focused on synchronizing breathing and movement to enter a relaxed meditative state. The positions were generally less challenging than the other classes we took, and the instructor let us go at our own pace. The instructor came around and adjusted our form when we were in more challenging positions to make sure we were doing them correctly.

Winner
After trying all the yoga classes from three different studios, the winner of this edition of Guide to Greenwich is The Studio Greenwich. The calming, welcoming atmosphere of the studio itself and the teaching techniques and style of the instructor made us want to attend another class. We were able to fully relax during the class and accomplish positions that we were unfamiliar with before.