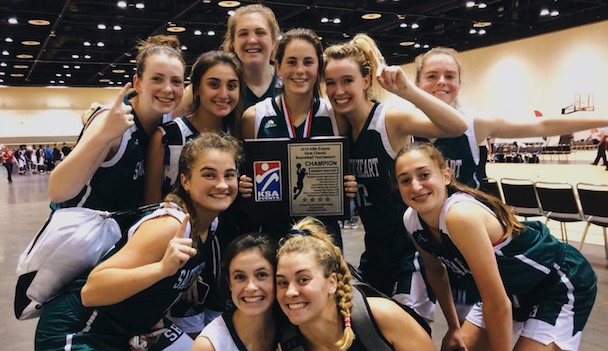 Processed with VSCO with a6 preset

The 2018-2019 Sacred Heart Greenwich varsity basketball team proudly calls themselves “a second-half team” and they have embraced the title.  Countless times, the team has been nearly tied with their competition at half time, only to make a comeback and win the game.  There was no exception Thursday, February 21 during their Fairchester Athletic Association (FAA) Semi-Final game against crosstown-rivals Greenwich Academy (GA).  For the team, their spot in the FAA finals, and their first-ever appearance in New England Preparatory School Athletic Council (NEPSAC) tournament showcased not only their growth and perseverance, but also the strength of the Basketball program.

The team’s loss to the Hamden Hall Country Day School in the FAA Semi-Final game ended their 2017-2018 season.  In addition to losing five graduating seniors, the team was forced to restructure themselves and find a new dynamic for the 2018-2019 season.  Four new members joined the team including eighth-grader Olivia Caponiti, senior Lindsay Morgner, and freshmen Franny O’Brien and Sarah Augustine.

The team began their season by winning five games in a row, beating teams they had lost to in the past including Hamden Hall and School of the Holy Child.  They brought the winning streak to their winter training trip, the Kaylee Scholarship Association (KSA) Basketball tournament in Orlando, Florida.  Having never participated in the KSA tournament before, the team was optimistic that their team would benefit from the experience.

“The KSA tournament was an amazing opportunity for our team,” Senior Sarah Eckerson said. “We were able to play teams from across the country and get such a different playing experience. It definitely changed the pace of our game and taught us to be patient while waiting for the right play to develop. We left Orlando still undefeated and kept that streak for a while once we came home, so it was very rewarding. We also bonded a lot on our trip so I think that helped with our team chemistry and improved the way we all play together.”

Once they returned to Greenwich the team added two more wins against Hopkins School, a team they lost to last season, and Westover School.  These victories brought them to a total of seven regular-season wins and zero loses halfway through their season.

“We were definitely challenged in a few games, but we knew we had to play at our maximum potential if we wanted to stay in the game instead of just going into the games and hoping to win,” Senior captain Ryan Smith said.

After defeating schools they had fallen to in the past the team was both optimistic and anxious to play against Choate Rosemary Hall, a school they lost to 18-56 during the 2017-2018 season.  Choate took an early lead during the first half which concluded a score of 31-20 Choate.  True to their name, the “second half team” came back and fought for the lead which they momentarily achieved.  In the end, Choate was victorious with a final score of 43-49.

“Choate was one of our best games of the season,” Sarah said. “We held them to under 50 points. Last year we lost to them by 38 points, but this year we only lost by 6. This game boosted our confidence in our ability to compete at higher levels.”

In order to prepare for games against historically difficult opponents, the team tried to simulate real game situations.  They also discussed ways they could prevent their opponents from shooting.

“Leading up to our big games, we scrimmaged a lot in practice because that helps us get game-like reps in,” Sarah said. “We talked about who their biggest players were and how we would focus on playing effective defense to limit their scoring.”

These are strategies they used when facing the three-time FAA champions St. Luke’s School, Thursday, January 31.  Even though they lost 50-73 they were able to conclude the season as the number two seed in the FAA tournament right behind number one St. Luke’s.

The first championship game was the quarterfinals Tuesday, February 19 against Hopkins which then won 45-32.  After winning their quarterfinal game the worked on preparing for their semi-final game.  Their game was against sixth-seeded Greenwich Academy who caused an upset when they defeated third-seeded Greens Farms Academy during their own quarterfinal game.
The game which took place Thursday, February 21 was virtually tied during the first half.  GA took the lead initially, however, Sacred Heart overtook the gators and were able to end the first half with a score of 30-26.  Determined to grow the gap, the second half-team did what they are best known for and ended the game with a score 65-42.  The Tigers outscored the Gators during the regular season by four points. However, during the semi-final game, there was a 23 point difference.

“Beating GA […] was something that we have never been able to do in basketball for the last three years I have played,” Ryan said. “So it is a tangible success that proves how hard we trained and fought to reach our goal.”

For the first time since 2014, the varsity basketball team found themselves in the FAA championship finals. Although the game was against a difficult competitor such as St. Luke’s, the team was empowered after just defeating GA to go on and compete in the finals.

“We’ve lost in the semifinals a few years in a row now so getting past that stage definitely gave us more confidence going into the finals,” Sarah said. “We ended up beating GA by 23 points after a tight first half so we once again showed how strong of a second-half team we are and proved that we were fully ready to take on St. Luke’s in the finals.”

Although they lost the FAA finals, they shifted their focus on competing for the first time ever in Sacred Heart basketball history in the NEPSAC tournament.  Since they were the eighth seed they played against first seed Marianapolis Preparatory School. In the end, Sacred Heart fell to Marianapolis with a score of 28-70 which put an end to their historic season.

“I’m so proud of all our team’s success this season,” Sarah said. “A lot of it comes from how we’ve learned to play together. We’re all very unselfish with the ball and know that everyone has a unique roll on the team. We have such a range of players- seniors to eighth graders, old varsity players to new ones- and we all work together every day to make each other better.”