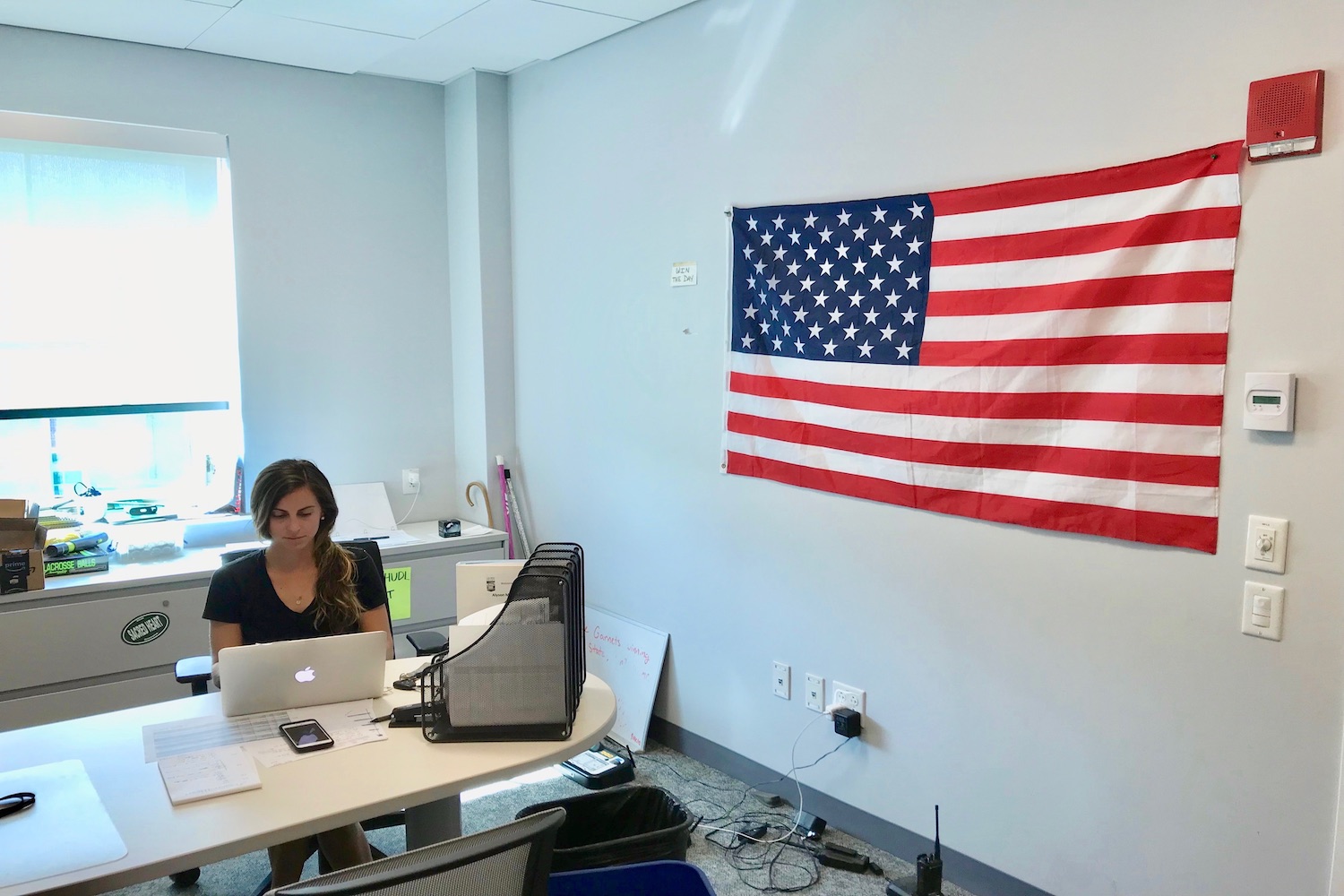 Ms. Aly Messinger decorated her new office in the Athletic Center with memorabilia from the United States Naval Academy.

Running into a new face in the Athletic Department

Ms. Alyson Messinger, Assistant Director of Athletics for Operations and Leadership Programming, Varsity Lacrosse Coach, and Director of Lacrosse Development, sat comfortably in her new office in the Athletic Center.  With an American flag draped across the wall perpendicular to her desk, Ms. Messinger reflected on her time spent coaching women’s lacrosse at the United States Naval Academy.

“At the Naval Academy, there was a girl on our team.  She worked so hard, and we had a really big game the next day.  She went through practice.  She went through her whole day, went to sleep, woke up the next morning, got ready for the game, and she kept nodding off and was so out of it.  She said, ‘Sorry coach, sorry coach, I’m working really hard I’m really sorry.’ I kept getting on her, telling her, ‘this is not you.’  Later, I found out that she had been up until 4 in the morning mustering in her company and she just refused to complain.  She refused to say anything about it, which I think was an incredible character move.  With the amount of effort and work she put in, even though she was exhausted, we ended up winning that game.  I think she scored five goals, and it was just a really moving experience for me to see someone go through such a hard thing, but have such an incredible level-headed mindset and just do something that would be impossible for someone else to do.”

Ms. Messinger, originally from Mendham, New Jersey, began her collegiate lacrosse career at the University of North Carolina at Chapel Hill (UNC) in 2012.  Starring on the Atlantic Coast Conference (ACC) lacrosse team at UNC, Ms. Messinger was a three-time All-America selection and two-time ALL-ACC honoree, ranking her among the most accomplished players in the ACC.

During her four-year run, Ms. Messinger and her teammates earned two National Championship titles in 2013 and 2016.  The National Collegiate Athletic Association (NCAA) named Ms. Messinger the Most Outstanding Player after their 2016 victory.

Off the field, Ms. Messinger majored in Exercise and Sports Science with a Concentration in Sports Administration.  Ms. Messinger met different coaches, athletes, and professionals working in the sports industry, developing her skills and experience as a sports administrator.  Her decorated years at UNC also helped strengthen her values and roles as a leader.

“The classes I took at Carolina were very structured and really helped me to excel not only in my classes, but on the field as well,” Ms. Messinger said.  “Going along with that, my experience being able to win championships and work at the highest level has really helped me mature in my leadership skills.”

After graduating from UNC in 2016, Ms. Messinger took a position coaching for the United States Naval Academy women’s lacrosse team.  For the 2018 season, Ms. Messinger worked as the Associate Head Coach for Offense, according to navysports.com.

“I was able to gain a lot of observational experience… a better understanding of a different type of leadership.””

“It was really cool to learn from people working at the Naval Academy, along with the kids I was teaching because everything they do is centered around making each other better, leading each other, mentoring and being disciplined when things are really tough,” Ms. Messinger said.  “I was able to gain a lot of observational experience and really just a better understanding of a different type of leadership.”

This spring, Ms. Messinger will work with the defending Fairchester Athletic Association (FAA) lacrosse champions as varsity lacrosse coach.  Ms. Messinger is eager to bring her experience to Sacred Heart and learn from a new network of athletes, coaches, and faculty.

“I’m really excited about what the school brings, it’s definitely a great institution,” Ms. Messinger said.  “It has a lot of great kids that are working on the leadership side of things and have really good talent on the athletic side, so I’m super excited to be working with awesome people and helping in any way I can.”