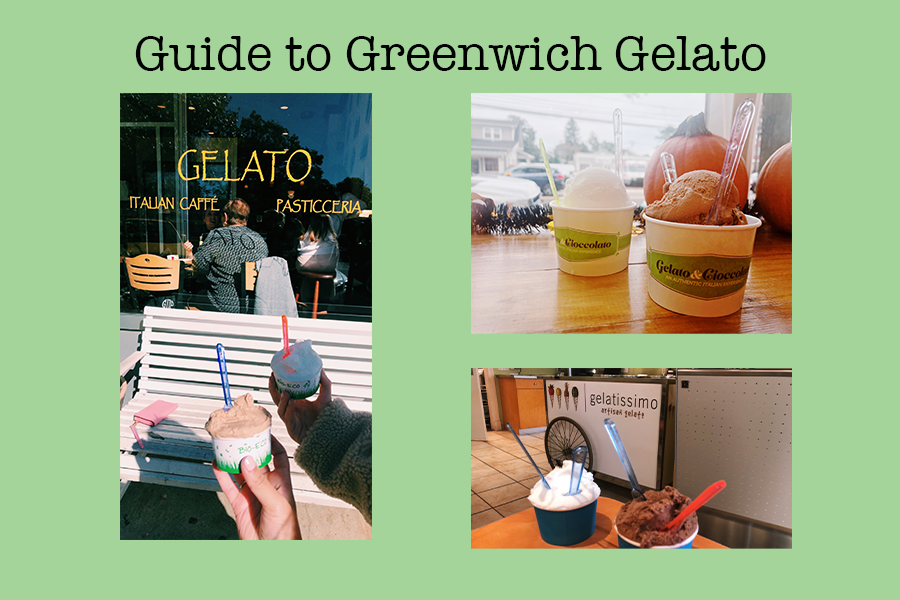 For this edition of Guide to Greenwich, we wandered through Greenwich and the surrounding area in pursuit of the best gelato.  The popular frozen treat, originating in Italy, is available in many different flavors, however, we chose to focus on Nutella and lemon varieties.

We began our quest for gelato at Gelatissimo, an authentic Italian café situated on Forest Street in downtown New Canaan, Connecticut.  Upon arriving at the shop, we placed our order after waiting in a very short line.  The staff members were efficient and eager to help, so we received our gelato promptly.

After paying a total of $8 for two small cups of gelato, $3.95 per cup, we chose from a vast array of seating, including two outdoor benches, to enjoy our gelato.  We ordered one cup of the Gianduiotto and one cup of the Limone gelato.

The Gianduiotto, a mixture of chocolate and hazelnut gelato, tasted overpoweringly sweet, reminding us of cake batter, yet it contained a strong, accurate hazelnut flavor and a pleasant, velvety texture.  On the other hand, the Limone gelato’s texture was icy and coarse, not at all satisfying.  Additionally, the gelato’s flavor was remarkably sour at first, yet had a sweet aftertaste.  Overall, Gelatissimo’s gelato incorporated strong flavors and enjoyable textures.

For our second stop, we visited Greenwich Avenue’s La Fenice.  Owned by Italians Simone and Salvatore, the eatery is an authentic Italian gelato shop.  When we arrived, there was a short wait, despite the fact that there was no line.  However, the staff proved to be kind and considerate.

La Fenice’s gelato was more expensive than our previous stop, costing $13 for two small cups.  The shop also contained limited seating, with only two small tables and a counter, causing us to choose a bench outside to eat our gelato.  The Nutella flavor was sweet, but not too rich and overpowering.  In addition, the gelato tasted strongly of hazelnut, yet was slightly lacking in chocolate flavor.  The consistency of the gelato was exceptionally creamy, soft, and fluffy.  Similarly, the lemon gelato had a pleasantly tart lemon flavor, but was not overwhelmingly sour, making it a very refreshing treat.  All in all, La Fenice is a perfect place to enjoy genuine Italian gelato.

Lastly, we traveled to Gelato & Cioccolato in Cos Cob.  The gelato shop takes pride in following traditional Italian recipes and using either local or imported Italian ingredients, according to gelatoecioccalto.com.  The café was small but cozy with cheerful decor.  When we arrived, the staff was very friendly and efficient, so we received our gelato quickly and paid $9 for two small cups.

Because the eatery was small, there were limited seating options, causing us to eat our gelato at the counter.  The Nutella flavored gelato had a sweet chocolate flavor, yet lacked hazelnut notes.  In contrast, our lemon gelato had a strong lemon flavor but was a bit too sour.  Both gelatos had an ice cream-like texture, meaning they were not as smooth and creamy as we would have liked.  Although the gelato was somewhat lacking in flavor, the shop’s pleasant atmosphere, paired with its welcoming staff, made up for it.

After careful consideration, we ultimately decided that La Fenice is the winner of this edition of Guide to Greenwich.  The tasty, flavorful gelato, along with the friendly staff and convenient location, truly raised La Fenice above the other gelato cafés.